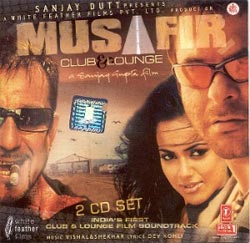 If you thought that Kaante was a thematic well orchestrated ‘get your feet off the floor’ type of soundtrack, then Sanjay Gupta’s latest film, ‘Musafir’ can only top that. Musafir can only ground the fact that Sanjay Gupta has a great ear for music. Furthermore, T-Series, Sanjay Dutt films/White Feather Films have done something even more innovative, which works. The music for Musafir is on two CD set, something that is becoming more popular lately. Having one up on the rest, one is titled ‘Club’ and the other ‘Lounge’; for once they aren’t being dishonest when they said this is India’s first. The music for Musafir matches the rugged theme and look that the film carries and is perfect in arousing interest. A mixture of entire remixes by the under-rated Vishal-Shekhar; the music for Musafir is definitely groundbreaking. For all intensive purposes, the music for Musafir is even better, it is clear that the songs on the soundtrack may not even appear on the film. A few of the songs on the album are taken from Kaante and several appear twice, which is clearly an indication that this music is for your listening pleasure, and how.

The Club CD opens up with ‘Ishq Kabhi Kario Na’, composed by Anand Raj Anand. The mix associated with this track is titled ‘Flea Market Trance Mix’. Sunidhi Chauhan is in her complete element here sounding as sultry as ever and the mix makes the song worthy of several repeats. Sukhwinder Singh sings the track later on in the ‘Paridiso Mix’. The basic beat and element remains the same though Singh’s has a bit of familiarity to it which makes it a bit more likable.

The song doing the rounds on promos, and the undeniable best of the lot, is the irresistible ‘Saaki’. Sung by Sukhwinder and Sunidhi Chauhan, it almost combines their work in ‘Ishq Kabhi Kario Na’ and gives us something else even better. This ‘Psychedelic Insomnia Mix’ is sure to hit the spot for all who love club like music.
K.K. steps in, also very well in his element, in ‘Door Se Paas’. The mood shifts mildly as this is a romantic number but it is still has that ‘soul’ element to it, which makes it fit in thematically. K.K is very astounding in this song and had it none been for the ‘Missy in the Pool Mix’ element to the track, the song probably would have been less likable.

The familiarly titled ‘Rabba’ is so good it has appeared on the compilation four times! Twice on CLUB and twice on LOUNGE (CD 2). Perhaps it is not that good, but the song is appealing in its solemnly creative kind of way. The two versions on CLUB are ‘Techno’. Krishna sings the first song in the ‘Agony and Ecstasy Mix’, which has lyrics by Kumaar and Dev Kohli. Krishna’s version has a more rustic feel to it, and his voice sounds a bit folksier almost like the late Nusrat Fateh Ali Khan. Sukhwinder’s version on the lounge CD with the ‘kiss of death’ remix is a bit tastier for the male version. Both of Richa Sharma’s renditions are better, however, and are more worthy of the repeat button.

‘Tez Dhaar’ is sung by the producer and co-star himself, Sanjay Dutt. The song has a very hip hop/rap feel to it, in both the ‘Sex on Wheels Mix’ (produced by DJ Akeel with lyrics by Vishal and Milap Jhaveri), and the Billa’s Journey Mix. Dutt is predominantly talking throughout the track as well which makes the song more of a miss than anything else.
Four songs from Kaante are remixed here, all contributed by Anand Raj Anand. ‘Ishq Samunder’ (Back to Life Mix), ‘Rama Re’, ‘Yaar Mangayasi’ (Eternal Moment Mix) and my personal favorite ‘Mahi Ve’ (Sleep With Destiny Mix). Not being a particular fan of ‘Rama Re’, I will say that those who liked it in 2002 will like it here in the ‘The Boys are Back’ mix. One thing to note, I could hardly discern whether these were remixes or the originals. They sound very much like the original songs. But, they don’t stand out that way and blend very well with the rest of the soundtrack. So, no harm no foul.

The song has two romantic songs. Ironic, I know. Some may look at it as a fallacy, but even these songs are spiced up and laced with remix filled sounds. One of them is arguably the best song of the soundtrack and one of the best romance songs we’ve heard recently.
The long heard from Hema Sardesai sings the pop styled cabaret number “Sun Suniyo” remixed with the “Anjuna Laguna Mix”. The song is more wordy than anything else and a bit less likable than the rest, but decent nonetheless.

Kumar Sanu and Sunidhi Chauhan sing ‘Phir Na Kehna’ a routine run of the mill romance song with the ‘Crazy in Zanzibar’ mix. The song is passable but is more enjoyable seeing as though Sanu is rarely heard, that too with Sunidhi Chauhan.
‘Ek Dil Ne’ is sung by Shreya Ghoshal and Kunal Ganjawala with the ‘Casa Brittona Mix’. While it is no surprise that Ghoshal makes this song so lovable, Kunal is really a revelation here. Finally has been roped in to more than the folksy chorus! The song is soothingly romantic and simply perfect and one of the highlights of the soundtrack despite being a romantic one in the midst of cabaret styled ones.

After frequent releases that are often repetitive and lack innovation, Musafir’s album deserves to be patronized based on its creativity alone. Irrespective of whether these tunes will be in the film or not, Musafir is definitely worth the purchase. Creativity like this deserves the award and certainly makes the Anil Kapoor-Sanjay Dutt-Sameera Reddy film worth anticipating!