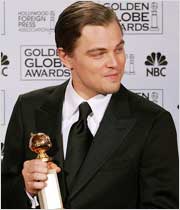 The Howard Hughes epic The Aviator and the road-trip romp Sideways earned best-picture Golden Globes, boosting their status as front-runners for the upcoming Academy Awards.

The Aviator won on Sunday for best dramatic film, giving it an edge at the Oscars, which favour heavyweight drama. Sideways won for comedy film.

Jamie Foxx of the Ray Charles film biography Ray , Hilary Swank of the boxing saga Million Dollar Baby , Annette Bening of the showbiz comedy Being Julia and Leonardo DiCaprio of The Aviator also boosted their Oscar odds by winning the top acting Globes.

The Aviator ended up with three Golden Globes, while Sideways , Million Dollar Baby , and Closer won two apiece. “Can I just tell you that I am having the ride of my life right now?” said Foxx, considered the favorite to win the best-actor Oscar for his uncanny emulation of Ray Charles, who died last year.

“I wish I could take what I’m feeling right now and put it in the water system, and we would all love each other a whole lot more.” Earning a record three Globe nominations, Foxx lost in his other two categories, supporting movie actor for Collateral and actor in a TV movie or miniseries for Redemption .

Bening won for best actress in a movie musical or comedy, playing an aging stage diva in 1930s London who plots gleeful revenge against the men in her life.

Backstage, Bening said that while Hollywood economics is geared toward roles for younger actresses, she said there are filmmakers eager to present tales of older women.

“I think there’s no question that sexism exists, but I think that as long as people are willing to fight and create interesting stories that involve women of all different ages, then the movies will get made,” Bening said.