Manisha Koirala, who is now busy working for Bengali filmmaker Rituparno Ghosh’s “Khela”, is thankful that good directors did not forget her despite a nearly two-year-long sabbatical. 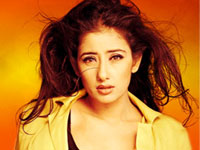 Manisha, who took time off after doing some 60 odd films in various Indian languages, including Bollywood flicks, is one of the few mainstream film stars to have ventured into non-Hindi movies.

“I was bored with the roles offered to me and was waiting for the right offer all this while. I started shooting again in August. Thank god, good directors did not forget me while I was away!” she said.

Akbar Khan’s “Taj Mahal: A Love Story” would be the first release in months for the actress.

“I utilised the time to do things I wanted to do apart from acting. I learnt moviemaking and indulged in other activities. I even made a short film at New York University,” Manisha, who has been associated with films for almost two decades, told in an interview.

So, is she now equipped to make a full-length movie? “Not really. I will need to attend a few more classes to learn more about other streams of filmmaking like, say, camerawork,” she explained.

Talking about “Khela” that is still being shot, Manisha said, “It is a very sensitive film. It is about a woman whose filmmaker husband gets busy with his work and she feels unwanted.”

“I adore the way Ritu gets into a woman’s head, portrays her and her complexities.”

The actress who made waves in the south with superhits like Mani Ratnam’s “Bombay”(1994) and Sankar’s “Mudhalvan” (1999) said Ghosh was open to contributions from everybody.

“I don’t know whether it is the Bengali film industry or Ritu’s movie – everybody, including the clap-boy, tries to be creative. Ritu himself has said that a film is made by everyone involved and not just the director.”

“Compared to that, someone like Mani Ratnam is stricter in terms of contributions. Everything goes according to Mani’s vision of the movie.”

Manisha also has Ram Gopal Varma’s “Darwaza Bandh Rakhna” and “Shiv”. She will feature in “Tulsi” with Irrfan Khan and a few untitled films.

She has joined the southern Indian production house G.V. Films Ltd as a member of the board of directors.

“As a member of the G.V. Films’ board of directors I will be sharing the same responsibility as other directors. I will also be providing inputs from my own experience in the field in the past 20 years,” she said.

Manisha herself ventured into production with “Paisa Vasool” (2004) that bombed at the box office.

“I take full responsibility for the film’s debacle. I could have perhaps marketed the movie better,” she said.