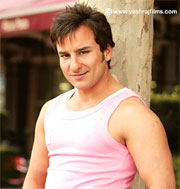 Despite the fact that SALAAM NAMASTE has got a mixed response at the box-office, the one who has truly benefited from the film is actor Saif Ali Khan, whose performance has come for a lot of appreciation in the film. For one, Saif definitely seems to have consolidated his position in the Yashraj banner, what with Yash Chopra signing him for one more film with director Siddharth Anand.

The Yashraj banner isn’t the only one where Saif has become a hot favorite. Post PARINEETA, producer Vinod Chopra has been singing praises about his tremendous potential as an actor, one of the reasons that led him to cast Saif in a powerful role in YAGNA, now re-titled.

There is another filmmaker, Sudhir Mishra, who considers him to be a great performer and chaired the jury that gave him the national award for his performance in HUM TUM, but was subjected to a lot of flak for his decision. Mishra claims that he has met Saif only a couple of times and does not know him well enough but was convinced that he deserved the national award to the hilt for his commendable performance in HUM TUM. “I am glad that the industry is now realizing his potential. When we chose him for the national award in HUM TUM, there was skepticism from certain quarters about our choice. I was very disappointed that the industry did not stand up in Saif’s defense when fingers were being pointed at Saif. There wasn’t a single person from the industry who publicly congratulated him on his achievement. They’ll probably do that now as he proves himself in his films,” says Mishra.