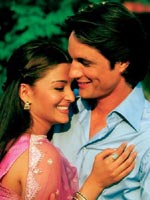 In a surprise revelation and despite all the sniping critics and snarling reviews, Britain has paid surprisingly fervent homage – in cash at the box office – to Gurinder Chadha’s extraordinary attempt to put Jane Austen in a sari.

According to new official figures, Bollywood has triumphed over two major Hollywood offerings in the films’ first weekend out on general release.

The official figures, just out in Screen International, show that Bollywood’s chaste formulaic routine of meeting and marrying sans sex has pummeled romantic comedy Wimbledon from the top spot into third place.