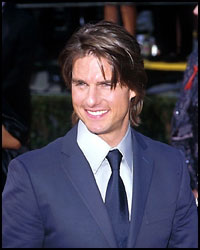 Tom Cruise thrilled pal Steven Spielberg over the weekend when he showed up unexpectedly to honor the movie mogul at the Chicago Film Festival.
Spielberg was momentarily left speechless when his War of the Worlds star walked out on stage to present him with a Golden Hugo Lifetime Achievement Award.

Cruise told the stunned audience, “I had the great pleasure of meeting Steven. And you took me to dinner when I was a young actor.

“I’ve seen every one of his films many, many times. I actually study his films.”

It wasn’t the only surprise for Spielberg at the event–celebrity friends like Harrison Ford, George Lucas and Catherine Zeta-Jones all sent him celebratory video messages, which were beamed onto a big screen behind the director.