Is it ‘sunset’ time for Pierce Bond Brosnan 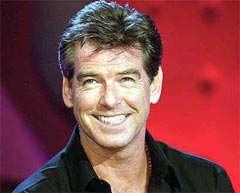 Pierce Brosnan smiles during filming for Friday Night with Jonathan Ross. During filming the TV talk show, Brosnan confirms he will never again appear as the movie spy hero James Bond, saying “When they told me I was angry and the conversation was pretty short and sweet, then I felt this great sense of liberation”.
The actor had reservations about leaving his role of James Bond. “I would not like anyone else to be Bond,” he joked. “I would like them to stop there and never do another one.”

Pierce Brosnan and co-star Naomie Harris arrive together at the premiere of his new movie.Brett Ratner’s forthcoming movie, After the Sunset , hits theaters on November 12. The film tells what happens when a master jewel thief Pierce Brosnan and his girlfriend (Salma Hayek) retire to an island paradise. Lifelong nemesis, a crafty FBI agent played by Woody Harrellson, tracks them down to make sure the thief has actually retired, but the pair soon engage in a new game of cat-and-mouse.

Pierce Brosnan and Naomie Harris at the premiere of After the Sunset in Leicester Square on Tuesday.
Pierce Brosnan has proved that despite bidding farewell to James Bond he’s still a force to be reckoned with.

The handsome Irishman made quite an impression on London’s Leicester Square on Tuesday night, when he turned out for the premiere of his new flick After The Sunset.