Jackie C(h)an, if Shah Rukh can 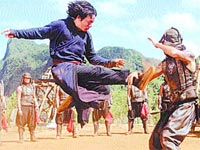 His face is a mask of intense concentration. Jackie Chan is aware that the roots of Shaolin Kung Fu can be traced to Kalaripayattu , Kerala’s ancient martial arts. Far away in Hampi, outside a stone temple, Chan patiently went through a dozen takes of intricate kalari movements for his latest film. “We’ve adapted the basics of Kalaripayattu and improvised on them,” says the action maestro, who makes no bones about his fascination for India.

“I really want to do an Indian film,” he says, and slips into flashback mode. “In fact, I tried to start something with a production company in India. We discussed scripts, they gave me a couple of them, I gave them a few ideas – but eventually, we couldn’t agree on anything.” But almost as if to make amends, Chan’s latest action flick is being shot partially in India and also has an Indian co-producer, Bobby Bedi.

Previous Article
Is it ‘sunset’ time for Pierce Bond Brosnan
Next Article
What a girl wants, ask Christina