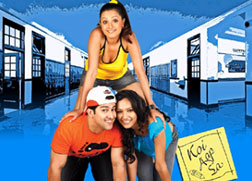 Can a man and a woman remain friends without turning into lovers? Yes, said “When Harry Met Sally” … Maybe, says “Koi Aap Sa”, producer Ekta Kapoor’s heart-warming though inconsistent homage to the cinema of Karan Johar.

In fact “Koi Aap Sa”, by far the most valid film Kapoor has produced, is a contemporary version of “Kuch Kuch Hota Hai” with Aftab Shivdasani, Natassha and Dipannita playing the man, the tomboy and the femme fatale on the kaleidoscopic college campus.

While the ladies replicate Kajol and Rani Mukherjee’s characters even in incidental details (Aftab pleads with Natassha not to abandon college, a la Shah Rukh’s famous train sequence with Kajol), the metro-centric male protagonist in “Koi Aap Sa” is quite a departure from the self-centred cool dude Shah Rukh Khan played.

Aftab’s Rohan is cool but committed, sporty but sensitive, precocious but poetic. He flirts with the campus siren Dipannita Sharma but stands steadfast by his best friend Natassha when she’s raped.

This bit of gruesome plot construction serves a dual purpose. It gives the film an edge of social relevance (unwed motherhood in a stress-free campus romance is quite something) and it gives our hero a chance to play several deeply sensitive shades of manhood.

Hats off to Aftab for playing a man of today with both a feminine and masculine side to his character with such effortless charm.

Partly na�ve and partly a man-of-the-world, Aftab’s Rohit is a consummate hero embodying the best aspects of romantic comedy. The actor has overcome his earlier gawkiness to communicate an endearing spectrum of urban emotions related to love, friendship and commitment.

It’s a polished performance, more so than portions of the narrative, which tend to veer into screechy self-parody. The sweaty pub dances and football games seem to be from a zillion Hollywood blues-chasers, and the supporting cast of friends, foes and relatives are straight out of Ekta Kapoor’s trillion soaps.

But the film has a surface and slight charm of its own…It manoeuvres its way through a plethora of cute situations.

Cleverly packaged and edited to accentuate the sweaty curves in the jukebox triangle, the film leaves you with a smile for projecting an aura of positivity and for venturing into a young theme without getting callow shallow and crude.