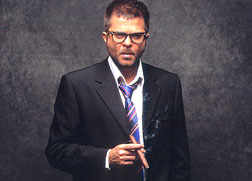 “Stop confusing me!” Anil Kapoor, playing a cigar-smoking lawyer who looks like an emaciated avatar of Winston Churchill on a bad-hair day, tells Irrfan Khan during the course of this astonishingly abstruse piece of suspenseful filmmaking.

“Chocolate” is like an elaborate jigsaw in which, you suspect, some pieces wouldn’t fit in even if you made the effort to bring it all together. The smoking, smouldering, sinister and cryptic ambience of Akira Kurosawa’s “Roshomon” and Brian Singer’s “The Usual Suspects” is crafted with penetrating diligence by debutant director Vivek Agnihotri.

You can’t help admire the restrained flamboyance of Agnihotri’s cinema. Every frame is done up in stonewashed shades denoting a glorious tradition of Hollywood gangster-ism.

But is this entertainment?

You might have come across a similar use of light and shade, fright and thrill, and a bountiful background score (by Sanjay Choudhury) in some other recent thrillers like Sanjay Gupta’s “Kaante” and Anubhav Sinha’s “Dus” where the setting was Los Angeles and Calgary, respectively.

Agnihotri’s chosen location London is a smouldering sensuous cauldron of international intrigue. His elaborate, though finally unfinished, screenplay is praiseworthy only for trying to take the thriller genre away from the norm.

Beyond that, the film doesn’t seem to establish a coherent connection between crime and motive, at least not in the audiences’ purview and perception.

Hard to believe, but at heart “Chocolate” is a simple story of how five Indian musicians in London – Irrfan Khan, Tanushree Dutta, Arshad Warsi, Emran Hashmi and Suniel Shetty – get themselves into deep and mysterious trouble with international terrorism until they’re bailed out by a cigar-smoking smirking hotshot lawyer (Anil Kapoor) and a rather scruffy and bohemian female journalist (Sushma Reddy) who seem to share more than just a casual friendship. 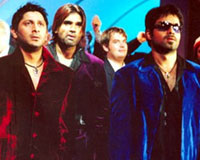 In one sequence Ms. Reddy whips off her top and yells, “I wear a bra too!”

So she does. It’s a smartly done-up debut for Ms Reddy. She’s spunky and vivacious. But the mysterious film is rather at odds with the blizzard of brio that the characters try to exude.

The ambience is created with utmost care. But the characters just don’t seem to belong to any clearly chalked-out motivation. They meander through a series of bizarre adventures that take them further and further away from the precincts of believability until we end up looking at their predicament through a haze of hyphenated surrealistic interludes, punctuated by bouts of singing and dancing in smoky pubs where Tanushree shakes a leg or two to Pritam’s pacy racy but finally unproductive tunes.

The performances don’t really lift the tale from the realm of the bizarre. Irrfan as the accused and Anil as the lawyer make an interesting study of contrasts. But the rest of the cast seems to depend excessively on hazy Hollywoodian role models of how freelancing adventurers behave when they’re put into a unique crisis on screen.

While Arshad has some funny moments of dialogue to see his scene-stealing personality through, for example, “There are two kinds of women. Sexy and very sexy”, others get to mouth weird words.

An incidental character stumbles up to Suniel and says, “Have we met, or have wet?”