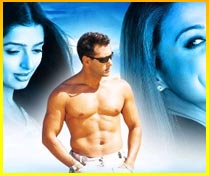 After the success of ‘Tere Naam’ the second offering from Orion & Mad production ‘Dil Ne Jise Apna Kahaa’ had a lot of expectations associated with it, but this time instead of Satish Kaushik, Salman Khan’s brother-in-law Atull Agnihotri was in the directors chair. 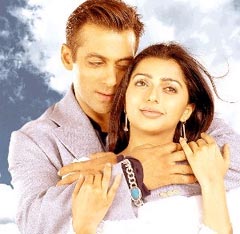 ‘Dil Ne Jise Apna Kahaa’ is the story of a top advertising baron Rishab (Salman Khan) who is madly in love with his medico wife Parineeta (Preity Zinta). They have an ideal life and are expecting their first child. Parineeta’s one desire in life is to open a children’s hospital which is affordable for the rich and poor alike.

Enters Dhani (Bhumika Chawla) who has all the possible heart ailments. She is badly in need of a heart donor so that she can have a heart transplant and lead a normal life. Dhani is Parineeta’s patient and she is very keen on Dhani being able to go in for a transplant.

By a twist of fate Parineeta has a fatal accident. A broken Rishab tries to compromise with life aided by support from his sister (Renuka Sahane) and friend (Asif Sheikh). As Rishab recovers somewhat Asif realises that Rishab has developed some feelings for Dhani.

From here to the end there are ups and downs about Dhani and Rishab’s relationship. While Dhani is madly in love with him Rishab who does like her refuses to accept anyone else in his life. So will Rishab accept Dhani?

Dil Ne Jise Apnaa Kahaa’ can be neatly broken into two parts, the part with Preity that has some of the best scenes of the movie and the post Preity phase which has its moments but pales in comparision. The movie gets too morose and thankfully manages to get back to lighter moments, but the inconsistency and ups and downs are the let downs of the movie.

While the first part has many light moments, second part has a fair share of gay jokes, which is basically the ‘in thing’ in bollywood comedy today. Thankfully they don’t go overboard like in some of the other recent flicks.

Coming to the performances, Preity in her role (though you crave for more of her) is amazing. No wonder she is the uncrowned number one today. 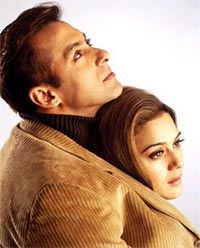 After Garv- Pride and Honor, Phir Milenge and the recent hit Mujhse Shaadi Karoge, Salman Khan shows he is a brilliant actor. One feels the weeping bit is carried a bit far, for which the script has to be blamed.

Bhumika Chawla looks good during the latter parts and shows a lot of promise for the future.

Asif Sheikh as Salman’s friend is a revelation. Rati Agnihotri and Helen (as Bhumika’s grandmother) dissapaoint. Delnaz Paul is refreshing and Suresh Menon interesting with his stammering bit. Bobby Darling is cute.

Salman Khan puts in a very restrained performance and you see another facet of this The title song ‘Dil Ne Jise Apna Kahaa’, ‘Jaane Bahara’ and ‘Go Balle Balle’ impress while ‘Bindiya Chamakne Lagi’ is ok and basically aimed at the masses though it is spoiled by bad dancing by Bhumika and Riya Sen.

Atull Agnihotri’s direction, just like his story is jerky and ordinary. Some of the cinematic liberties he has taken will be ripped by the harsher critics. His direction is as impressive (???) as his acting!

Keshav Naidu editing is strictly average and he should have pruned the last parts by 5-10 minutes. Choreography by Vaibahvi Merchant, Ganesh Acharya and Raju Khan are surprisingly good. Cinematography by Stephen Fernandes and Kishore Kapadia are good and visually appealing except for the night shots.

At the box-office ‘Dil Ne Jise Apna Kahaa’ has little or no hope of success and the start has been dull and shows no signs of picking up.