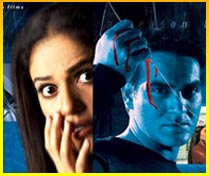 Mystery or palmistry? That’s the question. The critical turnaround in this burnt out thriller depends on a wrong prediction by a devious palmist.

Maybe he was looking at a future that this film certainly doesn’t have.

This purported chiller relies so heavily on bizarre coincidences, you wonder what the debutant director hopes to achieve by subverting the thriller genre to the point where the characters appear to be spoofing terror.

The crammed soundtrack contains every conceivable sound of suspense. Doors creak open, candles hiss to their extinction, footsteps run frantically over wooden stairs like horses bolting out of stables and the terrified heroine (played by a furiously over-the-top under-the-weather Gracy Singh) gasps and screams so hard, you fear for her heaving lungs and your own eardrums rather than the character’s safety.

“Wajahh” is the most purposeless and puerile whodunit in recent times. Director Gautam Adhikari tries to scare us with trademark ammunition deployed in fear-fests. But sorry, no show. And certainly no terror, unless we’re talking about the terror of being held captive in a dark empty theatre for 180 minutes with all the exits sealed.

The cast dictates the calibre of tension in the drama. Arbaaz Khan, forever the duke of deadpan acting, plays a shrink with a gun whose emotive range is shrunk down drastically. Between Khan’s grimace and sneer there’s no cheer for the audience. We helplessly watch this wooden non-actor make a mockery of every conceivable component in the plot.

Gracy Singh as his wife who thinks he wants to murder her (maybe he just wants to end her ceaseless sobs and screams) goes the other way. All her expressions of fear are so exaggerated she’s like Urmila Matondkar in Ram Gopal Varma’s “Kaun” gone completely awry. 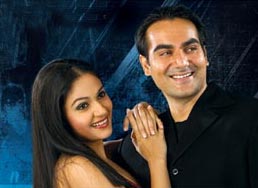 The ‘Kaun’ job is a constant factor in this film of non-actors. Even while we’re supposed to be guessing the identity of the wannabe killer, we also wonder why anyone would want to kill poor harmless Gracy Singh for anything except bad acting.

Mysterious marauders stalk her any time of the day — in spite of the fact that her neuro-surgeon husband spends all his time hanging around at home trying to look mean and menacing. Then there’re a couple of hangers-on (played by TV actor Sudesh Berry and co) whose function in the pathetic plot is as indeterminate as the audiences’ motivation for braving this cinematic travesty.

Somewhere down the line, for no crime or reason, Shamita Shetty shows up as Arbaaz Khan’s ex-flame, ready to burn up all over again at the slightest pretext. She throws tantrums more often than other characters throw corny lines.

The dialogues are wretchedly unfunny. Satish Kaushik as a comic cop tries to awaken the corpse that’s this murder mystery.

But sorry, even divine intervention would be nonplussed by the director’s determined effort to make the worst thriller on earth. With the support of a cast and crew that seems to have been picked up from an amateur filmmaking school in Bhatinda, Gautam Adhikari almost gets there.