TV artiste Mukesh Khanna, who lent his voice to an animated “Hanuman” that will hit the big screen Oct 21, feels celluloid comics have arrived.
“I really feel that ‘Hanuman’ is going to set a trend and more and more animation films will be made in India,” said Mukesh, who shot to fame with TV serials like “Mahabharata” and “Shaktiman”. 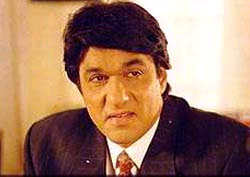 “Hanuman”, a Sahara One Motion Pictures’ animation epic, is directed by animation guru V.G. Samant and traces the extraordinary journey of the mythical superhero.

“Hanuman”, Mukesh told Bollywood Trade in an interview, “is a perfect Diwali festival gift for children.”

Here are some excerpts from the interview:

How close is Hanuman to your heart?

Hanuman is very close to my heart. He symbolises faith and Indian culture. He is also known as Sankat Mochan – the remover of obstacles and problems.

Hanuman is universally accepted as the greatest superhero. And I personally feel that making a movie on him is a brilliant idea. It is a must-watch for every Indian!

You have lent your voice to “Hanuman” just as Shah Rukh Khan did for “The Incredibles”.

Lending my voice for this movie was a challenge, but I was not worried. I really feel that “Hanuman” is going to set a trend and more and more animation films will be made in India.

What kind of research and preparation did you do?

Hanuman has blessed me with such a voice that I didn’t have to go through any kind of pain in lending voice to the character. I kept one thing in mind while dubbing, that Hanumanji is a source of ‘shakti’ or strength, so my voice has to have that power in it.

Also, the director briefed me that they didn’t want any kind of experiment with the voice. They just wanted it to be clear.

What is the strength of “Hanuman”?

It’s a very interesting and engrossing film and a complete entertainment for the entire family. What really stands out is the ‘baal roop’ or childhood form of Hanuman. Also, his naughtiness, power, innocent pranks and, of course, the excellent song “Akdam Bakdam”!

“Shaktiman” was the first superhero of Indian TV and “Hanuman” is the greatest superhero of all times. How does it feel to be an important part of both the projects?

“Shaktiman” was inspired by the greatest superhero of all time – Hanuman! And now, I have lent voice to his character! I just feel very blessed.

What message do you think “Hanuman” brings to the children, who have been your biggest fans?

Children need to realise the immense power that remains dormant within them, just as it was in the case of lord Hanuman. I hope that all children will worship their body. And that they don’t try to misuse power, but use it for the betterment of the weak and the downtrodden.

Previous Article
TOP TEN BOLLYWOOD SONG
Next Article
“I will never allow anyone else to dub for me again.” – Aftab Shivdasani

“I will never allow anyone else to dub for me again.” – Aftab Shivdasani
admin Jan 18