Filmmaker Ram Gopal Varma makes a rather candid statement about his new production “James” – it has nothing new to offer. But wait, he hasn’t finished yet. 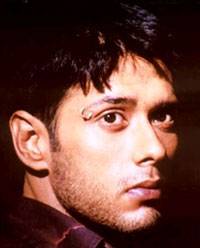 “For the first time a film of mine was sold all over India instantly…only on the strength of Mohit’s face. That’s remarkable for a film that has nothing new except the leading man,” Varma told IANS in an interview.

With hero Mohit, Varma hopes to do what star fathers and producers do for their prot. Excerpts from the interview:

I feel there are two different kinds of screen performers – the actor and the star. The actor is someone whom you can appreciate objectively. But a star is someone every viewer responds to individually. You can watch him without judging his acting. Mohit is more the consummate hero. That’s someone like Clint Eastwood…or like Nagarjuna in “Shiva” or Sylvester Stallone in “First Blood”.

What’s the difference between Mohit and the other actors you’ve introduced?

While other actors like Vivek Oberoi in “Company” fitted into scripts that were written from before, Mohit was the only actor for whom a whole project has been devised. It’s the first time that I’m doing a so-called launch film.

Why do you want to launch a star?

Why do the star-fathers or well-placed producers do it? You’ve a certain equity and you pass it on to your kin. I’m a manufacturer of products. A star’s charisma appeals to audiences. If I see potential in someone to develop into a star I’m bound to build on that. That’s what I’m doing with Mohit in “James”. How audiences would respond to him is not up to me. He’s being marketed as a matinee idol. He’s already doing two more films for me.

Are you pitching him as an angry young man?

He’s a cross between Nagarjuna in “Shiva” and Stallone in “First Blood”. A cornered guy reacting to his situation…It’s a very contemporary plot shot very stylishly. It’s a high-intensity action film. It’s not comic book violence. Here you feel the effect of every punch in your guts. The action genre has never been treated this way. There’s no story, but incidents strung together. “James” is one long action sequence carried forward by Mohit’s charisma. He’s the USP of the film.

“James” seems to be a success at the marketing level.

Nearly 300 prints of “James” are being released. That has never happened with any of my films…not even “Sarkar”, which I personally directed. Fifteen prints of “James” are being released in Bihar. For “Sarkar”, they released just 10 prints in Bihar. For the first time a film of mine was sold all over India instantly…only on the strength of Mohit’s face. That’s remarkable for a film that has nothing new except the leading man.

His introduction – when the girl is being teased by goondas and he rescues her – has been done in a million films. But not the way you’d see it done in “James”. It’s oft-told story told with a new intensity.

Where does Mohit come from?

I was told he was a family friend of Bhushan Kumar of T-Series. My first reaction to him was, he’d be good in a negative character. But when I saw his pictures and spoke to him I changed my mind. I told him I had no offer immediately. He waited more than two years for a script to materialise. I won’t change my mind about Mohit even if “James” doesn’t work. So many stars don’t work initially.

And the new girl?

Nisha Kothari…I saw her in the chorus of Negar Khan’s video “Chadti jawani”. I saw barely one close-up of hers. I met her. And signed her. She’s got a combination of innocence and oomph. The unique quality that Sridevi had.

Where did you discover the director of “James”?

Rohit Jugraj is a medical doctor. He worked with me during “Bhoot” as an assistant director. One day we were chatting and I wondered why we hadn’t seen a full-fledged action hero for so long. I turned to him and asked him to make a film with a full-on hero. That’s how “James” started.

People say Ram Gopal Varma’s films work only when he directs them.

“James” will disprove that. Of all my productions during the last one year, “Naach”, which I directed personally, took the lowest opening. My name didn’t make any difference to “Naach”. Audiences react to an individual film in the way they want to. Every film for me is a means to open a new door. In a 15-year career I’ve had highs and lows. But nothing has stopped me from making the films I want to.

To get up in the morning and know exactly what I want to do, and to be able to do it, is a big high. I’ve done it ever since I was in college.