He laughs as though he was watching one of his more raucous comedies. But the rumour that there has been a serious rift between David Dhawan and second-favourite leading man Salman (presuming Govinda still occupies the position of Hero No.1) has been gathering momentum for a while. 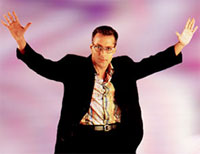 It’s even said that a project which David planned with Salman and Govinda has been shelved.

David protests: “How can I fight with Salman? We’ve been close friends for years now. I’ve done seven films with him. We laughed our heads off when we heard about the so-called fight between us. This is nothing but jealousy.”

“This film industry is filled with nasty negative elements who have nothing better to do than to create imaginary rifts between friends. Today by the grace of god, Salman is successful. So am I. People can’t see the two of us together,” David told in an interview.

But onlookers swear they have seen the director and star having a heated altercation, with Salman losing his cool.

“For their information, Salman was in my house for Ganpati last week. I’m directing a film for his home banner. Right now, I’m scripting the project. It’s not easy to design a film that would do justice to both Salman and Govinda, two of my favourites. They both have very strong images and I’ve to keep audiences’ expectations in mind.”

David pauses and then reveals: “It’s time I did at least one film that isn’t made according to what audiences expect but what I expect from myself. There’re so many talented boys and girls waiting for a break. I want to make a film with fresh faces. It will be for a corporate house. There are so many corporate houses which want me to make a film for them.” Another rumour doing the rounds is that David is readying his son for a star-launch?

“Don’t we have enough boys and girls from the industry? My son has been trained in filmmaking from New York. He wants to direct films. Right now he’s assisting me. It’d be interesting to see what kind of film he makes. He has my blessing and backing.”

Returning to the Salman topic, David reiterates: “Salman and I crossed the biggest hurdle when the tape scandal broke out on the eve of the release of ‘Maine Pyar Kyun Kiya.’ Salman and me fight? Never!”

Though David denies a rift in the ‘jodi’ No.1 (the number one pair), here’s looking at famous director-star pairs that eventually went kaput:

* Shakti Samanta-Rajesh Khanna (made several incredibly successful films together including “Aradhana”, “Amar Prem”, “Kati Patang”…until they went ‘Alag Alag’ (separate) with the film of that title.

* Ram Gopal Varma-Manoj Bajpai (a small stint in “Daud” led to the big break in “Satya.” Then Manoj asked for his remuneration. That was the end of the road)

Previous Article
“I will never allow anyone else to dub for me again.” – Aftab Shivdasani
Next Article
Mohit