Shilpa Shetty seems to be back in the reckoning after a lull following the controversy over her parents’ alleged links with the underworld. 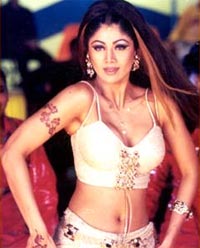 But those days are over and Shilpa is looking forward to her new release “Garv – Pride and Honour” and the forthcoming “Phir Milenge” in which she discards make up and glamour to play “today’s woman”.

In an interview with IANS, the actress says she is more focussed now and did not let the unpleasant controversy over her parents bog her down.

How has life changed after last year’s controversy?
I think I’m more focussed towards my work now. I was not bogged down by that incident.

What was the experience of working with a director like Revathy in “Phir Milenge”?
My mom kept praising her as she had seen “Mitr” and was excited about me working with her. I had not seen her films so did not know much of her. But I am glad Revathy chose me to be part of “Phir Milenge” in which I share screen space with accomplished actors like Salman Khan and Abhishek Bachchan.

I play the role of Tamanna in “Phir Milenge”. Tamanna is a today’s woman who is an orphan. She is the creative head of an ad agency, who is able to chalk out her life on her own without depending on anyone else. One fine day she wakes up and finds that her entire life is going to change.

So are you with makeup in this film?
The best thing about “Phir Milenge” is that Revathy refused to let me apply make up throughout the making of the film. In fact, I couldn’t recognise myself when I watched the monitor after every take on the sets. The character of Tamanna is like real life on celluloid. It is a very identifiable character. In real life, no woman wears pink eyeliners and shadow. Revathy did not want anything that would have looked unreal in her film.

How was it when you saw the film?
It is a very sensitive film as we deal with the delicate issue of AIDS. I had tears in my eyes when I saw the film. I was actually shocked to see myself and you will be amazed to see Abhishek and Salman who are both fantastic.

What about marriage?
Marriage is a very good thing (laughs). I go out with men and have a good time, but I have my career as a priority and I’m just getting the right movies at this point of time. I would certainly like to get married if I find the right man.