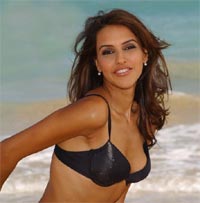 Controversy and Neha Dhupia seem synonymous! When Neha debuted in Harry Baweja’s Qayamat, she hit headlines! Much ado was made about her two- piece bikini scene a la Bo Derek. And her alleged link up with costar with Ajay Devgan only provided fodder to the gossip mills. Neha Dhupia is in the news once again. This time, it is the controversial film Julie. Needless to say, Neha for the first time is enacting a role of a prostitute. The bare dare scenes notwithstanding! To play safe, the director Deepak Shivdasani even stipulated in the contract that the story called for some bold scenes and did not want to face any music later by the artiste to which Neha willingly agreed. After all, what mattered was the central role. To get the controversies cleared straight from the horse’s mouth, we corner Neha for a one on one.

What was the after effect of playing a character like Julie?
That of turmoil, disturbance and emotional upheaval! While shooting, several times I thought what if something like this happened to me. Shooting continuously for months, I had to literally shake myself out of the character. It took its toll on me.

Did the character stay with you even after you had finished shooting for the film?
Yes! I’m not a switch-on switch-off artiste! Julie remained with me for a long time even after the shooting of the film was over. I could still feel her pain. I still sympathize with her about what she went through in life. Here, I would like to narrate an incident that happened recently. Though I’m a Sikh, whenever I pass by a church I draw a cross. And I gained this habit ever since I began shooting for Julie because it is she who does that whenever she passes by a church in the film. This, after 50 days of completion of the shooting for the film!

Is it true that director Deepak Shivdasani made you sign a contract stipulating that the film had bold scenes in them so that you wouldn’t create any brouhaha later?
Yes it’s true! Let me also mention that Deepak Shivdasani has not made me do anything more than what was mentioned in the contract. He has kept to his word. He has been a thorough professional. Though the film revolves around a prostitute, there isn’t much of skin show. The bold scenes will not titillate you. The audience will feel sorry for her. It will actually make them think, “What this poor woman had to go through!” There was no need for any body doubles. I was aware of what I did on the sets. See Julie is just a story of an innocent woman who lands up into prostitution.

After Julie there’s Rakht, right?
Yes! Both the films have shaped out to be pretty good. Of course, my role in Julie is meatier. I’m content with both films. I’m also content with the way my career is progressing.

There are stories that you did not actually get along with Bipasha Basu and Amrita Arora while shooting for Rakht?
Where did you hear this? Or did you read it? (laughs) I just finished a schedule with Bipasha and Amrita and there was no awkwardness on the sets. We were thorough professionals. Also, ever since I have begun shooting for Julie and Rakht, I have practically had no time to read all the rubbish that is written about me. I feel any kind of publicity, whether good or bad, helps. Chalo, at least people feel that I’m worth being talked about. Also if there are critical reports about me, there are also reports that write good about me. So it gets balanced.