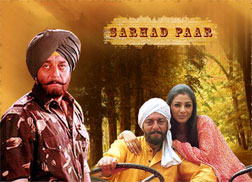 The Holy land of the Punjab is where the story of ‘Sarhad Paar’ is based. On the arid border of this terrorism-ridden state, army man Ranjit Singh (Sanjay Dutt) walks home after a long time lag. Declared missing in action by the state after he accidentally crossed the border, Ranjit Singh has gone through grave trauma and torment at the hands of terrorists. This has broken him completely, leaving him as nothing but a body with no progressive mind.

Amongst the faces to greet Ranjit on his return, is that of his wife Pammi (Tabu) and of his sister Simran (Mahima Choudhary). They are happy that their loved one is back but are shocked to see his condition. In the Army Hospital, Ranjit is trying to recuperate from the horrifying experiences he has gone through.

Meanwhile, Pammi and Simran try to help Ranjit to rejuvenate and get back to normal life. However no matter how hard they try, all that they come across is Ranjit’s blank face. Disappointed, Pammi begins giving up hope when Simran vows to bring Ranjit back to his normal self. How she will do this no one knows, but she has the support of Ravi (Chandrachur Singh), a folk singer whom she is engaged to.

Simran’s efforts pay off and Ranjit discovers the root cause of his pathetic condition. His tormentor was Bhaktavar (Rahul Dev), a mercenary who recruits traitors from both sides of the border. While Ranjit tries to fight the enemy within, Pammi tries to recapture the glorious moments with her husband and Simran is caught in the emotional dilemma between supporting her brother in his fight against his oppressor and fulfilling her marital commitment to the man she has tied the knot for life.

‘Sarhad Paar’ is a story of the heroism of a traumatized soldier who is up to take revenge for the cruelties and the hardships he had to face. It’s a tale of the faith and commitment of two women who provide a man the strength to achieve his goal. Blended with sensitive moments, emotional scenes, high drama and raw earthy action, the highlight is the powerhouse performance of Sanjay Dutt who plays an array of scenes while portraying a Sikh for the first time. As Ranjit Singh while he is the petrified soldier up for revenge, he is also the man whose urge for sweet romance with his wife still goes strong. While he is the ever-caring father figure to his sister, he is also the man of action with sharp senses to distinguish the right and the wrong, and to stand up against the evil. He is a staunch believer in the teaching that…”When all other means have failed, it is then righteous to take the sword in the hand”.