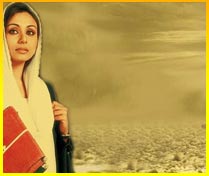 Yash Chopra, one of India’s great filmmakers, comes back with another love story “Veer-Zaara”. It has been a long wait for the Yash Chopra fans after the super hit “Dil To Pagal Hai”. The movie is produced by Aditya Chopra and Chopra himself under the banner of Yashraj films and it has music from the tunes of the late Madan Mohan. Slated for a diwali relase(Nov 12), Veer-Zaara is the most awaited film of the year.

Squadron leader Veer Pratap Singh is a a rescue pilot with the Indian Air Force. Who risks his own life to save the lives of others. One day, on duty, he comes across a stranded Zaara… A girl from Pakistan. Zaara, a carefree, sprightly girl has come to India to fulfill her surrogate mother’s dying wish. She meets with a bus accident leaving her stranded in a foreign land.

Twenty-two years later, Saamiya Siddiqui, a pakistani lawyer on her first case, finds herself face-to-face with an ageing Veer Pratap Singh. He has languished in a pakistan jail cell for 22 years and has not spoken to anyone all these years – and no one knows why.

Her mission is to discover the truth about Veer and see to it that justice is served. And thus starts her journey to unveil the truth… The story of Veer and his life…

Why has Veer been silent for 22 years?

Why is he in a jail in Pakistan?

What happened to her?

God has written the destinies of Veer and Zaara. Such that they can never be joined together. Saamiya has come to change that… To join Veer and Zaara toghether…Foreever…

A love that is an inspiration… And will remain in a lengend forever.