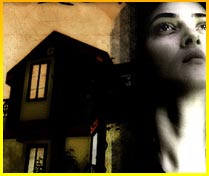 Virag(Chakravarthy) and Jhilmil(Sushmita Sen) are the quintessential made for each other couple. She works as a general physician in a reputed hospital in Pune.

Virag is a writer by profession. To complete his new assignment he requires peace, hence the decision to shift to Shanti Kutir on the outskirts of Pune.

Jhilmil and Virag’s four-year-old son enjoying his summer break and plan to explore the house.

A father engrossed in writing his new book, a mother busy at work and one perceptive child exploring his new house. With no one to keep an eye on him, Rohan ventures into different areas of the bungalow only to notice things – strange occurrences that no one believes. His parents think he is lying until the unthinkable happens. And suddenly Rohan’s stories seem very real. The police think it is the act of a psychopath, but Virag believes otherwise. He turns to his son for the truth, but is it too late?