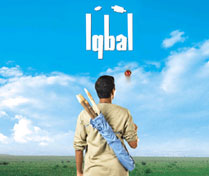 “When the heart begins to think like the head… that’s when real success is achieved,” says coach Naseeruddin Shah to his special student, a deaf-and-mute boy who strives to become a national cricket player.

The world of Nagesh Kukunoor’s latest film is a mellow one of basic and valuable emotions. This isn’t the first film where the director has dealt with the ambiguous world of adolescent dreams. Unlike Kukunoor’s “Rockford”, “Iqbal” rocks to a rustic and heartfelt raga-rhythm.

The location: a small Muslim village. The texture: tender and basic. The end result: a film that exudes the familiar aura of sweet dreams.

Though the music (Salim-Suleiman) and songs (Sukwinder Singh) tend to hammer in the message a trifle too insistently, this is a world where heart and head could easily exchange places. 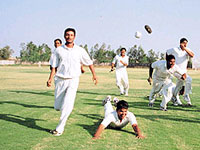 Kukunoor’s control over the emotional quotient ensures that Iqbal Khan’s struggle to realise his dream doesn’t get too maudlin. Each time Iqbal spins that ball across the dusty field, the screen lights up like the sun glimmering in a glorious giggle from behind surly clouds.

And yet a lot of brains has gone behind those spinning balls. Consciously or otherwise, Kukunoor has torn leaves out of Ashutosh Gowariker’s “Lagaan” and Sanjay Leela Bhansali’s “Black” to create a quaint and compelling nugget on the triumph of the human spirit.

Wisely, Kukunoor doesn’t allow Iqbal’s journey from bucolic anonymity to national-level recogntion to be heavy handed or overstated. Often, the narration is so light to the touch, you tend to mistake the airiness for shallowness. To compound the sense of an extra-blithe souffl’, there are characters who appear to be straight out of a guidebook on symmetrically articulate cinema. 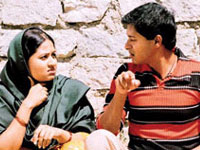 Iqbal’s doting mother (Prateeksha Londkar), his forbidding cynical father (Yatin Karyekar) and his precocious and supportive sister (Shweta Prasad) and, most of all, the burnt-out alcoholic coach (Naseer) redeeming himself by taking on the corrupt system to get his prot’g’ to be successful… these are characters we’ve encountered before, in movies from “Rocky” to “Chariots Of Fire”, and from “Naache Mayuri” to “Black”.

It’s in the way that Kukunoor criss-crosses, mixes-and-matches characters and attitudes that the storytelling shines beyond the realm of the familiar. If Iqbal’s rapport with his coach is devoid of surprising moments, it’s also heart warming enough to make you forget its lack of newness. 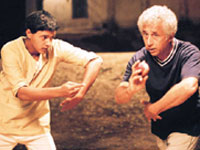 The glow of lived-in emotions springs up on you like a summer breeze caressing your face just long enough to make you count your blessings for the gift of life.

“Iqbal” is a very gentle fable of valiant and non-violent aspirations told through a lyrical labyrinth of clich’d, but nonetheless charming characters. The wheeling dealing sports coach, played by Girish Karnad, or the unctuous sports manager, who swoops down on the new bright hope on the cricket field, are all characters we’ve met on several occasions in various arresting and subverted avatars.

Kukunoor gives a special twist and a turn to these simply imagined people. Destiny, fortitude and diligence aren’t treated as lofty concepts, but offshoots of destiny, better left unruffled rather than subjected to serious tampering.

The performances infuse a supple vigour to the fragile tale. Shreyas Talpade is more than adequate as the unspoken and yet highly expressive protagonist. But Shweta Prasad, who plays Iqbal’s doting kid sister, steals every scene from Talpade. Her precocity and wisdom are put to specially telling use in her sparring scenes with Naseer.

Naseer is, in fact, the life and breath of “Iqbal”, never mind if the breath of his character is intoxicated! Through the alcoholic fumes his persona emerges as yet another character of true worth, frail and yet triumphant. He’s specially remarkable in his moments with little Shweta and the sequence where Iqbal’s mother warns him she’ll personally kill him if her son fails to realise his dream. (“The women of this family seem to be exceptionally dangerous,” Naseer cocks an eyebrow).

Finally though, the lightness of the material, and the luminous light that the narration casts across the frames are leitmotifs energising the film’s emotions only to the point where the characters appear to glow with reasonable flow of light. There are no outbursts of inventive energy to irrigate the theme beyond a point. 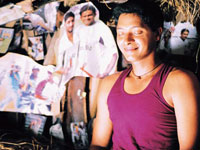 And we look at Iqbal as a child of a lesser god with the mind of a genius and the destiny of a winner.

The winning streak underpins some of the weaker moments in “Iqbal” (like that longish sequence in the darkened courtyard where the “evil scheming” coach Girish Karnad tries to buy off “innocent dreamer” Iqbal’s conscience).

You can’t come away from this big-little film without cheering for its twin heroes… the physically challenged 18-year old Iqbal and his washed-out inebriated coach whose twinkling eyes and inbuilt sense of humour carry forward the tale from its deliberately frail beginnings to a rousing finale.

Iqbal qualifies as a must-see effort, not so much for its virtuosity as its artlessness of vision. No one here tells a lie. Not the storytellers, not his creations