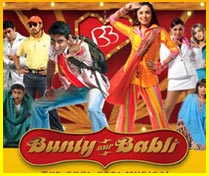 Some of the best masala films were churned out by the dream merchants in the 1970s and 1980s. Films such as SHOLAY, NASEEB, AMAR AKBAR ANTHONY, PARVARISH, LAAWARIS, TRISHUL’ had the audience flocking the cinema halls.

In these fast-changing times, when film-makers rarely attempt typical masala films, since the emphasis is more towards realistic cinema in a commercial format, comes BUNTY AUR BABLI from the house of Yash Raj.

Every Yash Raj film is special. And rightly so!

The Numero Uno production house, with an impressive and enviable track record, now comes up with a masala fare, BUNTY AUR BABLI, reminiscent of the non-stop entertainers of the 1970s and 1980s.

Unfortunately, BUNTY AUR BABLI is half as convincing as the masala entertainers of yore. Despite some of the biggest names involved in this film, BUNTY AUR BABLI fails to transport you to a world of make-believe. The problem lies in its screenplay, which shows promise initially, but drops alarmingly in the post-interval portions.In short, BUNTY AUR BABLI is a golden opportunity gone waste! Bunty and Babli are two avid dreamers. Two free souls born into caged small town realities. They grow weary of being two specks on the horizon. They desire the horizon itself.

And so they pack their aspirations in worn out bags, whip a scarf of confidence around their proud necks and set forth. On a journey across the length and breadth of the country, spinning circles around the people they meet. 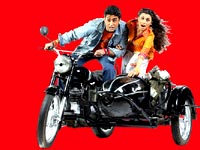 Vimmi aka Babli [Rani Mukerji] faces a similar situation. Does she follow the course every other young marriageable girl does? Or does she carve new fatelines on her soft-as-butter palms? In her mind, she’s the foxiest thing to ever have hit a ramp. She’s the hottie the world can just gape at, but never touch. So she too decides to fly the coop.

Somewhere, along their individual journeys, Rakesh and Vimmi meet, flogged by circumstances but unwilling to concede.

Hollywood has often produced capers that depict characters on the run. Having shades of BONNIE AND CLYDE [a trailblazing motion picture that started a trend in Hollywood], BUNTY AUR BABLI steps into a territory that very few Indian films have ventured into. In a way, BUNTY AUR BABLI defies the stereotype, but the format is akin to those by-now-famous entertainers that movie enthusiasts still remember vividly.

BUNTY AUR BABLI starts off pretty well and the story about two ambitious souls is laid out in a fashion that the common man can identify with. Their background, the two strangers meeting at a point when both have tasted failure, their first petty crime, their subsequent antics’ the screenplay has its interesting moments.

The first half is breezy, though not completely engaging. The narrative moves at a sluggish pace, but a few sequences in this half are worth a mention. These include:

The confrontation between Raj Babbar and his errant son Abhishek.

A clerk seeking sexual favors from Rani to include her name in the Miss India contestants’ list.

The Big B makes a dramatic entry at the intermission and you expect the film to scale dizzy heights.

Bunty Aur BabliAlas! That doesn’t happen. BUNTY AUR BABLI falls to an all-time low in the latter part. Yes, there are a few skillfully executed sequences, like the Taj Mahal sell-out and the one involving the robbery of the gold from the aircraft.

But the problem with the post-interval portions is that it lacks the meat to keep the viewer’s interest alive. Everyone eagerly awaits fireworks when the two Bachchans come face to face, but their first scene together [the drunken act!] is boring and long-drawn-out and even the song that follows, with Aishwarya Rai, doesn’t set the screen ablaze or work any kind of a magic. In fact, this song is a mere prop to enhance the star-value of the film.

The pre-climax, when the Big B finally uncovers the identity of Bunty and Babli, is expertly handled, but from thereon, again, the film stands on a shaky stool. The conclusion, when the Big B has a change of heart and lets off the two robbers, only goes to show that in Hindi cinema, the hero is always a hero, with a heart of gold. Irrespective of the fact that Bunty and Babli have created a nationwide stir with their robberies, the honest lawman pardons them simply because he realizes that the husband-wife con team are sorry about the crimes they had committed. Bizarre!

Shaad Ali’s direction is efficient at places, but he is letdown, and terribly at that, by a screenplay of convenience [penned by Jaideep Sahni]. The ease with which both Bunty and Babli commit crimes, that too at an alarming rate, only goes to show that the writer is completely clueless about the law and order situation in the country or perhaps, he’s under the impression that lawbreakers and conmen rule this nation!

Shankar-Ehsaan-Loy’s music is another drawback. In view of the fact that every Yash Raj product is embellished with a sparkling musical score, the music of BUNTY AUR BABLI is a complete downer. ‘Dhadak Dhadak’ Tujhe Bulaye Re’ [at the very start of the film] is the sole track that you wish to hum after the show has ended. The songs are well filmed, no doubt, but none have those mesmerizing qualities that Yash Raj products always boast of.

Cinematography [Abhik Mukhopadhyay] is of a high quality. The sound design [Anuj Mathur] is appropriate.

Despite the fact that BUNTY AUR BABLI doesn’t really demand histrionics from any of the actors, it must be said that the three principal characters, Amitabh Bachchan, Abhishek Bachchan and Rani Mukerji, deliver topnotch performances.

Bunty Aur BabliAmitabh is convincing in a role that suits him to the T. However, the hardcore fans of the veteran may feel disappointed since he doesn’t really get much scope in terms of screen-time. Abhishek Bachchan is wonderful. The actor is getting better with every release. He handles the light moments with the same sincerity with which he handles the emotional ones. Rani Mukerji is superb. The actor sinks her teeth into this role and comes out with flying colors.

The film has a number of characters, but the ones who register the maximum impact are Raj Babbar, Punit Issar, Kiran Joneja Sippy and Rameshwari. Prem Chopra and Pratima Kazmi are alright.

On the whole, BUNTY AUR BABLI just doesn’t have the meat to enthrall the moviegoers. At the box-office, the film has taken an excellent start due to two reasons — the Yash Raj brand and the fact that the two Bachchans have been teamed for the first time. While the first weekend will witness ‘House Full’ boards outside the single screens as well as the multiplexes, the film doesn’t have the power to sustain after the initial curiosity subsides. Monday onwards, the collections should come crashing down. Disappointing!