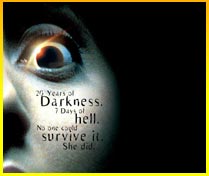 Bollywood is slowly mastering the art of making horror films!

Scary movies are meant to send a chill down your spine. If the viewer bites his/her nails in anxiety, if the eerie goings-on on the silver screen bring about a cold sweat on your forehead, if the supernatural moments raise the nape hairs, it only means that the storyteller has succeeded in scaring the daylights out of you. NAINA is one of the most imaginative and pulse-pounding horror films to come along in recent times. It leaves the viewer frightened, terrified and petrified. As a horror movie, it packs one genuine scare after another, right till its finale. Those who get unsettled by ghost stories are sure to freak out by NAINA. The film is definitely not for the weak-hearted!

NAINA tells the story of a young woman, Naina [Urmila Matondkar], blinded in childhood by an accident. Twenty years later, she receives a cornea implant and with it, the ability to see again. When the bandages come off, Naina opens her eyes to see not only the world she left behind, but also the unsettling presence of people who aren’t really there — dead people.

The cornea’s former owner was a girl with psychic powers, Khemi [Shweta Konnur], who could see dead people. A resident of Bhuj [in Gujarat], Khemi had witnessed and suffered much and her journey into the next world isn’t complete. As Naina comes closer to finding the ill-fated donor, she begins to understand the truly horrific Cassandra complex with which she is cursed: Naina sees the future and yet is powerless to change it.

No one believes Naina. Not her grand-mother [Kamini Khanna], not even the sympathetic psychiatrist Sameer [Anuj Sawhney], who seems to have taken more than just a clinical interest in her.

NAINA mutates from a horror movie to a psychological drama to a disaster flick [a twist in the climax]. It casts a spell strong enough that viewers won’t want to look away.

NAINA marks the birth of an outstanding storyteller in Shripal Morakhia. In both concept and execution, NAINA has a great deal more to offer than the thrillers made in the recent times. Morakhia has studied his predecessors [who’ve mastered the art of scaring moviegoers] very minutely and understands exactly what it takes to create the perfect scary moment.

NAINA works due to several factors; topping the list is, without doubt, a taut screenplay [Sagar Pandya, Shripal Morakhia]. The plot is refreshingly different and the narrative is laced with twists and turns that keep you on tenterhooks all through.

A few sequences in the first half do send a chill down the spine:-

The post-interval portions lend a different color to the story. The story shifts from the streets of London to a hamlet in Gujarat and the flashback portions – when Khemi’s past comes alive – keep you glued to the goings-on.

The finale – when Urmila again gets the visions at the Charing Cross station – is expertly executed, although it only adds to the length of the film. Ideally, the film should’ve ended when Urmila returns to London, once the Khemi chapter closes. Also, the entire exercise of how the station gets blown up should’ve been better explained!

Yet another reason why NAINA works so well as a horror film is because of Urmila Matondkar’s strong and convincing performance. Her performance here is nothing short of perfect and she handles the frightening episodes and the quiet, contemplative scenes with equal skill. The young actress, who proved her versatility in three contrasting roles [PINJAR, BHOOT, EK HASINA THI], drives home the point yet again that she can carry a film on her able shoulders. 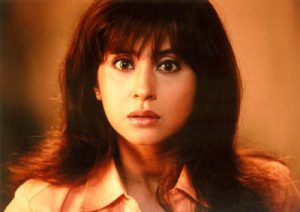 Anuj Sawhney is efficient, handling his part skilfully. Kamini Khanna is effective. But it is Khemi’s mother, essayed by Amardeep Jha, as well as Khemi, enacted by Shweta Konnur, who attracts your attention in the post-interval portions. Dinesh Lamba, as the villager, is first-rate. Sulbha Arya is adequate.

On the whole, if you’re expecting scares from NAINA, you will not be disappointed. The film delivers the goods without insulting anyone’s intelligence. At the box-office, the slow and classy treatment in this horror show will meet with some diverse reactions. Some will love it, while others may not give it their whole-hearted approval. Its business should be best at multiplexes!