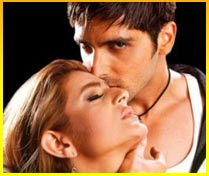 If only they chose different actors. Satish Kaushik’s “Vaada” is a typical example of a fine thriller that is marred by the choice of cast. Amisha Patel and Zayed Khan are the chief suspects in this crime of unfortunate casting.

The opening scene shows Karan (Zayed Khan) discovering Pooja’s dead body (Amisha Patel) in her house. He immediately wakes up Rahul (Arjun Rampal, once again in the role of a blind person) and informs him of his wife’s death. The police investigation begins and many questions are asked. Was Pooja murdered or did she commit suicide? Many flashbacks appear where we are shown how Rahul and Pooja first met. Unknown to Rahul, Pooja was in love with Karan before she met him. Hence trips down memory lane for Karan. He reminisces of their days together and how their intense romance ended so dramatically. Karan’s love for Pooja was obsessive in its nature and he had vowed to take her away from Rahul. Coming back to the present, Pooja’s body goes missing before the post-mortem can be arranged. Looking suspiciously like a murder, the finger of suspicion points at both the men: Karan and Rahul. The climax shows how Pooja’s death took place. 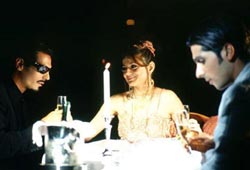 The story bubbles with tension and has enough twists and turns to keep viewers guessing until the end. Satish Kaushik keeps the pace just right, making the story very involving. He is still a very ordinary director and this shows in his borrowed style of zooming close-ups and slow-motion action scenes (imitated from Hollywood films). I think the film would have benefited from the inclusion of a very intelligent policeman, which could have been played by another star. Here, we do have a policeman but he is played by Rajesh Vivek.

VaadaThis is a predictable and rather pointless character who never actually does anything useful in the whole investigation. Kaushik’s limited directorial ability is demonstrated in the way that he has handled the policeman character. This character dilutes tension rather than adding to it. It could have something to do with the fact that the policeman is played by Rajesh Vivek. An actor who wastes the potential of his role by reducing it to nothing more than a caricature. The miscasting does not stop here.

Amisha Patel is a huge disappointment. She is a wooden actress who has very little emoting ability. Her voice suffers from a curious lack of expression and her eyes do not convey much. Patel ruins the climax with her shrieking (though it must be noted that it is the only part of the film where she resorts to her trademark screaming). Although Zayed Khan is a notch above her when it comes to acting, it is a shame that he feels he has to imitate Shah Rukh Khan in scenes where his manic obsession comes to the fore. He goes absolutely berserk in the final sequence, provoking laughter rather than sympathy. Kaushik could have told these actors to tone down their histrionics a touch. It is the director’s responsibility to make sure that these well-etched roles are done justice to.

Unlike all the others, Arjun Rampal is ideal for the role of Rahul. He has become more comfortable with emotional scenes and therefore is improving as an actor. He does well in the climax where he portrays feelings of anger, sadness and unmerciful grief. Languishing in various indifferent roles since his debut, “Vaada” brings us back to the Rampal that we saw in “Moksha”.

The mediocre songs do not sound any better on the big screen but “Vaada Hai Yeh” (by Alka Yagnik, Kumar Sanu and Udit Narayan) is nicely placed. The placing of “Ud Ud Jaaye” (Kailash Kher and Sunidhi Chauhan) is abrupt. ‘Ud Ud Jaaye’ has been cut short but that is not good enough, the entire song should have been deleted. Much better than Himesh Reshammiya’s music is Salim-Suleiman’s background score. Their hard work shows in the effective and dramatic way that their music heightens the impact of crucial scenes. As for the editing, it is inconsistent and the switches between past and present are confusing at times. In particular, the sequence of Karan’s flashback seems awkward coming after Rahul’s flashback.

I disliked Abbas-Mustan’s recent ‘Aitraaz’, which has similar themes of the sanctity of marriage and obsession. If you liked that corny thriller then you’ll love this one.