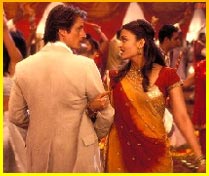 After the mega-success of Bend It Like Beckham, director Gurinder Chadha seems to have gained the confidence to experiment with genres. Bringing together Hollywood, Bollywood and the much loved Britflick genres is a very ambitious task. Does Gurinder succeed? Not totally but she gets full marks for trying.

Those familiar with Jane Austen’s classic novel “Pride and Prejudice” will delight in recognizing the character counterparts: The Bennet family are represented by the Bakshi’s, a Punjabi family living in Amritsar; Lizzie Bennet is now Lalita Bakshi; the bumbling Mr.Collins is transformed into Mr.Kohli; and Darcy is an American hotelier. 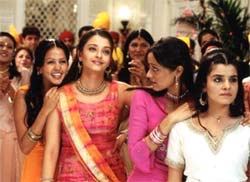 The story begins in Amritsar, India where Mrs.Bakshi (Nadira Babbar) is desperately trying to marry off her four daughters, Jaya (Namrata Shirodkar), Lalita (Aishwarya Rai), Lucky (Peeya Rai Choudhary) and Maya (Meghna Kothari) to rich, successful men. Anupam Kher plays their passive father, Mr.Bakshi. The family are preparing to attend the wedding celebrations of a family friend to a rich business man from London and of course, Mrs.Bakshi is keen to bag a rich NRI husband for her oldest daughter, Jaya.

The groom’s best man is another rich business man from London, Balraj, played by Naveen Andrews (Kamasutra, The English Patient, Bombay Boys). Balraj and Jaya meet and are instantly attracted to each other. Balraj is accompanied by his sarcastic sister, Kiran, played by Indira Varma (Kamasutra), and his best friend, Will Darcy, played by Martin Henderson (The Ring, Torque). Darcy and Lalita also meet but they seem to have an instant dislike for each other. Darcy’s arrogance really irks Lalita and the two seem unable to have a conversation without arguing.

Meanwhile, Mrs. Bakshi is busy trying to arrange Lalita’s marriage to the inept Mr.Kohli, played brilliantly by Nitin Ganatra, who returns to India from Los Angeles to find a bride.

Will the course of love run smoothly for Jaya and Balraj? Is Johnny Wickham really what he appears to be? Will Lalita and Darcy recognise their bickering as love for each other? Most people will know the answers to these questions as the film follows the novel fairly faithfully. However, the action does shift to London and then Los Angeles before returning to India for the finale. 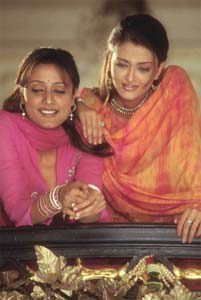 The direction and script are good with plenty of witty one liners for the non-Indian audience and plenty of amusing cultural references for the Indian audience. However, the songs are a major disaster! The opening wedding song “Balle Balle” is well placed but the other songs just make you cringe. Zoya and Farhan Akhtar have penned lyrics that seem to be direct translations from Hindi/Punjabi. As a result, the use of metaphors galore sound really odd in English. One passable number is “No Life Without Wife” which is titled after one of Mr.Kohli’s comic sayings. This number has a ‘Grease’ feel to it in both the sound and the way it’s picturised. Anu Malik’s tunes are a bit disappointing with the exception of “Payal Bajake” picturised on Ashanti.

The performances are all first rate, though. Aishwarya Rai seems surprisingly more comfortable acting in English than she does in Hindi; or maybe she just had a more inspiring director this time. Martin Henderson is suitably cool and arrogant as Darcy and Nadira Babbar is very entertaining as the overbearing Mrs.Bakshi. However, Nitin Ganatra steals the show with his portrayal of Mr.Kohli and Meghna’s snake dance is one of the funniest (intentionally) things I’ve seen in a long time.

Bride and Prejudice is definitely worth watching. You can’t compare this film to other Bollywood or Hollywood films because this film is a hybrid of the two. Gurinder Chadha has attempted something new and innovative and should be applauded for seeing it to completion. If you can get through the embarrassing songs you will most certainly enjoy the ride.